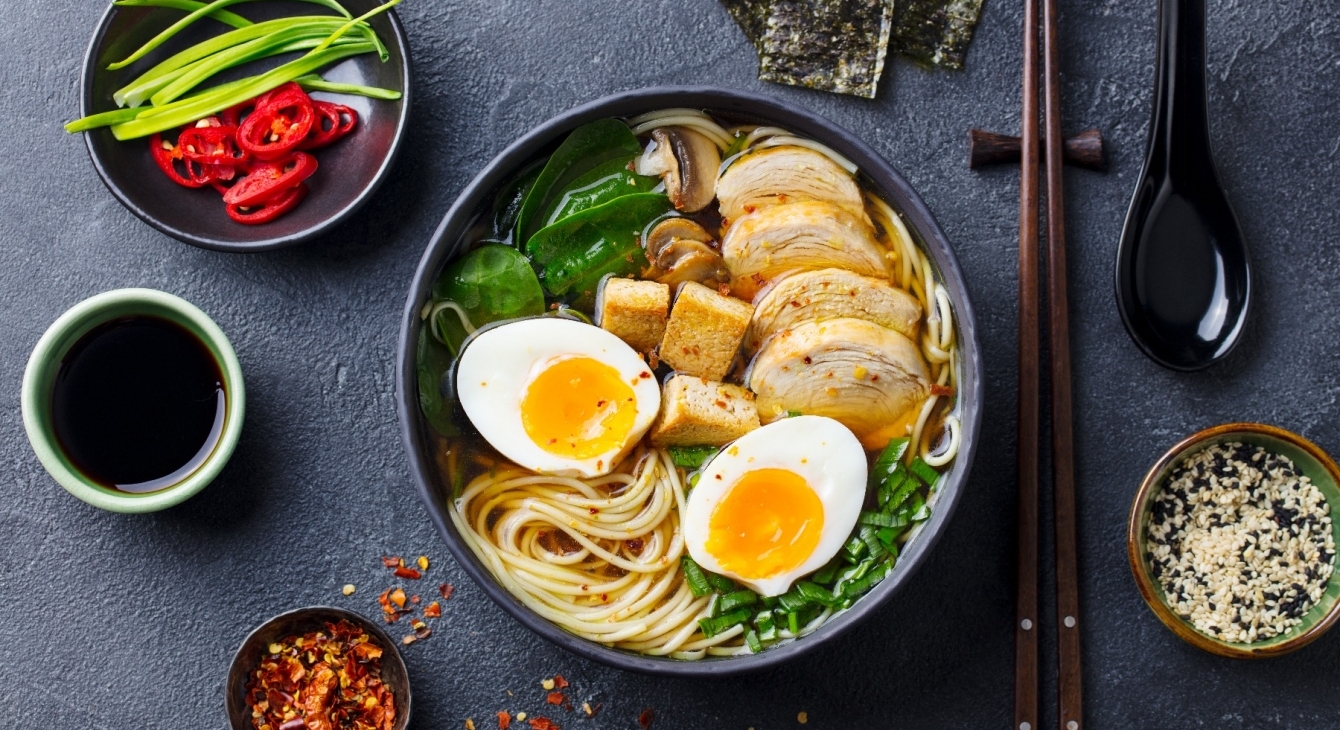 Everyone is familiar with the feeling like you are running out of power. But sometimes unexpected things can help you recharge and boost your energy. For instance, the main character of an anime we are going to recommend you this time — Naruto Uzumaki usually cheers himself up with a bowl of Japanese traditional street food — pork ramen. Let’s follow Naruto’s example and make this difficult dish to get more strength of spirit.

“I'm not going to take back my words. That's my way of the ninja!”

Naruto Uzumaki is an adolescent ninja, who has just graduated from an academy. A demon of a nine-taled fox, which attacked the village twelve years ago is trapped inside his body. This is the reason why the villagers dislike the boy. But Naruto never seems to be upset by that fact and does his best to achieve his biggest dream — to become the next Hokage, the strongest ninja of the Konoha — the Village, Hidden in the Leaves.

Several interesting facts about the anime:

Ramen (from “ra” — to pull and “men” — noodle) is a dish made out of noodle, which is very popular in Japan. But it origins from China and that’s a fact! So in China it is called “lamian” and in the Middle Asia it is known as “laghman”.

The dish arrived to Japan in the beginning of XX century when Chinese cuisine began to gain more and more popularity. Originally it was served only at special café-kiosks but now you could find it everywhere: in restaurants, cafes and even in special vending machines similar to those with coffee and snacks like chocolate and chips. But there’s no doubt that the most heartwarming ramen is still served at ramen-ya, tiny ramen restaurants.

There are hundreds of variations of ramen because almost every region in Japan has its own recipe. An “instant” ramen was created by Momofuku Ando, a Taiwanese-Japanese inventor in 1950. I guess there is no need of future explanation because everyone has tried it at least once in their life.

However there are several rules you should stick to while serving and eating ramen. According to an unwritten rule the guest, who arrived first will get their ramen first even if his or her order was ready later then the others. You should taste the soup first using a special spoon. After that you may start to eat noodles and toppings (vegetables and meat) and at the end — just drink the rest of the soup from a bowl! You can skip this last part if you are already full but it’s considered impolite to leave the rest of the toppings and noodles in the bowl. Ramen should be eaten quite quickly, while it’s still hot and the noodles not overcooked.

Ramen became so popular that it has a museum in Yokohama. The instant noodles was also named the greatest Japanese invention in 2000.

1. Let’s begin with udon noodles. Of course you can just buy it at the supermarket but it’s more interesting to make it at home. The amount of the ingredients mentioned above will be enough to make two portions of noodles. It’s important to use the precise quantity of flour, water and salt to get a perfect udon. Put 1 teaspoon of salt in the water (it should be around room temperature warm). Add the salted water to the flour and mix the dough in a round shape. If you are familiar with some ninja techniques, you may use the rasengan or another one for that purpose too. Put the dough in a plastic bag, make sure there is no air left inside. Let the dough sit for 30 minutes.

2. Traditionally the dough for udon is made by using your feet: wrap a bag with the dough in a towel and step on it carefully until the ball becomes flat. This process will take no more than 30 seconds. After that remove the dough from the bag, shape it back into a ball and repeat all the procedure once again. And do like that three times. Of course you can do it in a more usual way, but in Japan it is considered that when you do it with your feet the dough gets the right consistency. At the end make a ball again and leave it in the bag for more 2-3 hours.

3. Cover the surface of a cutting board with starch, roll the dough 3 mm flat. Spread some starch over it as well. First fold one third of the dough towards the centre then do it with the second third. Put the side with the fold line face down and cut into 2-3 mm wide strips. Pour some more starch on them and untangle the noodles. Your udon is ready! It’s better not to store it for a long time because the fresher are the noodles, the better is the taste.

4. Remove an excess fat from the pork, cut in pieces and pound to tender. Roll each piece and tie them with a thread to prevent the unfolding. On a frying pan add some oil and roast the pork from every side until golden.

5. Lay out the pork on the bottom of a large pot, add grated carrots, finely chopped onion and garlic, spices, sugar and 1 tablespoon of soy sauce. Pour three glasses of water and bring it to a boil. Pick up the scum, reduce the heat to low and cook for 2 hours. Let the broth cool, pick up the meat. Strain the broth, remove threads from meat pieces.

6. The next step is to make narutomaki. Put fish fillet, egg yolk, 1 teaspoon sugar and salt in a food processor. Mix until it comes together. Take 2 tablespoons of the mixture and add red food colouring to it. Place the white mix from a food processor on a food wrap and form a square. Cover it with the layer of a red one and roll it tight. Steam the narutomaki for 50 minutes.

7. Cook hardboiled eggs (or softboiled — depends on how you like it) and let them cool. Boil the rest of the soy sauce and add eggs to it turning them over to be sure they soaked in the sauce.

8. Cook the noodles. All the ingredients for a ramen are ready, the last step is to put them together. Warm up the broth. In a large bowl put noodles and garnish it with carrots and onion. Cut the pork and narutomaki into thin slices and eggs — in halves. Put them on the top of the noodles with vegetables and pour the warm broth in the bowl.

Despite the fact ramen is a quite complicated dish, the result is worth it to our opinion. The most important thing is to pull ourselves together and face any sort of challenge — because this is the way of a ninja!