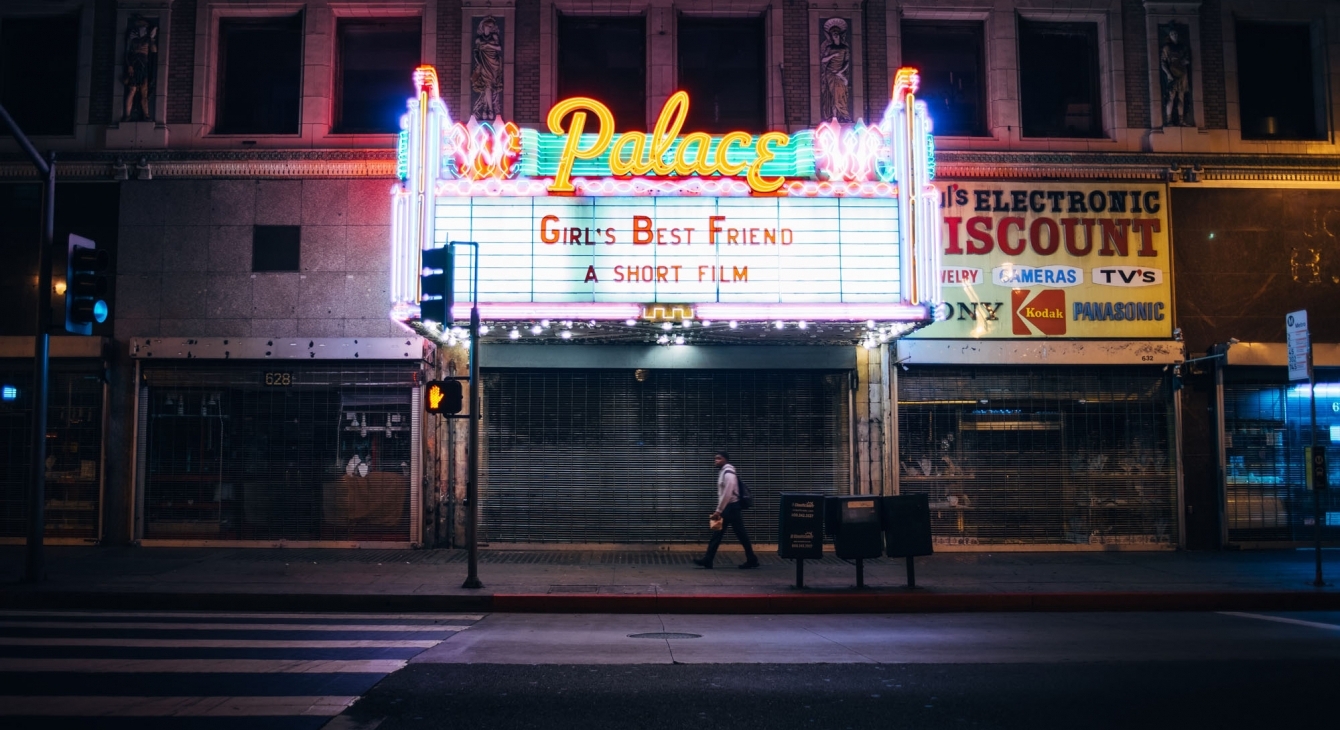 What could October offer to film fans? Several postponed premieres — crossing fingers and hope we will watch them this time! — few horrors for upcoming Halloween, a superhero action movie, a pair of film adaptations of classical novels and full-length sequels of some anime series. Read the article for more details!

An island off the coast of Thailand. Neil and Christine wake up having a terrible hangover and have no idea about what happened on the day before. They find a camera and a creepy video showing Neil killing Christine. A typhoon is threatening the small island and the next ferry will be there only in 24 hours. So the couple has to uncover the mystery involving black magic and a murder.

1980-e. Diana, a warrior from a hidden from prying eyes island called Themyscira, is dragged into a new adventure connected with her friend Barbara Minerva, a businessman named Max Lord and also with her past that will remind about itself in a way she would never expect.

The movie premiere has been already postponed several times because of the Corona, let’s hope we can watch it this time.

Turkey, the near future. The government developed a network to watch every step of its citizens. Something goes wrong while the network is installed in an old collapsing building. Mehmet, the building intendant, will have to face the evil entity that threatens him and the residents of the apartment complex.

A Call to Spy

The beginning of the World War II. Churchill orders the SOE (Special Operations Executive of Great Britain) to recruit and train women as spies, who will sabotage and organize the resistance of the society. Vera Atkins, a spy mistress, recruits two new members: Virginia Hall, an American with a wooden leg and big ambitions and Noor Inayat Khan, a Muslim pacifist. Together they try to sabotage the Nazi regime in France.

The plot of the story is based on the real events.

Noel Niihashi and Ninny Spangcole are witches living in London. They work for Wing Bind an organization, which protects and raises dragons. Only withes and wizards can contact with these creatures; under no circumstances the ordinary people should see them. One day something unexpected happens: a common man contacts a dragon. Ninny and Noel should deal with it now.

Masaki Hinaoka is a student, who grew up in Ibaraki prefecture not far from the Ooarai coast. One day he meets Sho Akitsuki, a newcomer, who transferred to his school right before the start of the summer holidays. Thanks to Sho, Masaki discovers a surfing world, finds new friends and collects new joyful and sad memories.

Bem, Bela and Belo are yokai (supernatural creatures). They arrive to a small coastal town. There is a mood of tension here because of the corruption of humans and the work of the monsters. The trio saves people from demons, who are threatening humans.

The upcoming movie that will be screened in October is a sequel of 12-episode series anime called “Bem” (2019).

Jack and Su are a Brooklyn couple, who, like many of us, are depend on technologies. One day they realize that they can loose a contact with each other because of their addiction and decide to go to a remote house in the woods, where they can’t get any service. Safely sheltered from calls and messages, the couple has no idea that the Earth has been attacked. A week after these strange events they return back to civilization…or at least to what remained of it.

An ordinary town, an ordinary school and ordinary high school kids. But there is a small nuance: anyone of them could explode at any moment. Literally. How to deal with this kind of feature and go through all the teenage problems at the same time?

The War with Grandpa

Peter’s life changes dramatically when his beloved granddad moves in to live in their family. But the joy of the boy ends pretty soon because now he has to give up his room to the grandpa and live in the creepy attic. With the help of his friends Peter develops a plan on how to chase granddad out of his room but the last one appears to be tougher that he looks. There’s nothing to do but to declare a war on each other.

The movie premiere should have been in September but it was postponed to October because of the pandemic.

Tom Carter is a successful bank robber, who met the woman of his life and wants to retire from his criminal past and live an honest life. But two ruthless FBI agents get in the way of his new life.

Tasya Vos is working for a secret organization that uses brain implants to inhabit and control human bodies. But one day she becomes a victim of a mysterious Possessor.

Radha, a playwright from New York is on the threshold of her forties and on a bad streak. All of the sudden she finds a new calling for herself — rap music. Now Radha is torn between the world of hip-hop and theatre in search for her true voice.

An urban legend of Chicago tells a story about Candyman — a ghost-murder with a hook instead of his hand. If you say his name five times while looking in the mirror, he will come and kill you.

Two couples, different times, different places, different stories about love. But the secret relationship will weave their destinies together in a way no one would be able to predict.

The Trial of the Chicago 7

This is a story of 7 people, who organized illegal “carnival” during the Democratic National Convention in Chicago in 1968. The gathering got out of hand and turned into a clash with police.

Based on real events.

Based on mostly autobiographical novel by Jack London, the film tells a story of Martin Eden, a lower-class young sailor. A fortuitous turn of events gives him a chance to enter literary elite circles.

Alex is a college freshman, who has no friends and misses his home. Maggie, a girl from university campus, invites him to the “hazing” party in Shithouse. They hang out all night and talk about their innermost feelings.

Taisho period. Tanjiro Kamado is the eldest son in the family. One day all the family is killed except his younger sister Nezuko. Nezuko is turned into a demon but she managed to keep the last shreds of her humanity. Together they are going on a dangerous journey in order to find the murderers of their family and break the spell on Nezuko.

The movie is a full-length sequel of “Demon Slayer: Kimetsu No Yaiba” (2019) anime series. In the new story the characters will solve a mystery of a train and its 40 passengers, who disappeared during their travel.

A young woman meets a nobleman widower called Maximilian de Winter in Monte Carlo. Falling in love and getting married a happy newlywed arrives at the husband’s castle in Cornwall. New Mrs. de Winter has hard times living in an old castle where everything reminds of the former mistress — even the servants are loyal to Rebecca, beautiful first wife of Mr. de Winter, who died tragically on a yacht. Is there any mystery behind her death?

The movie is based on the famous novel by Daphne du Maurier.

Death on the Nile

A young socialite is murdered during a cruise on a luxury liner. Hercule Poirot, a famous detective must to terminate his holidays and investigate the case — because literally everyone from victim acquaintances has a motive to kill the girl.

The film is based on a self-titled novel by Agatha Christie.

Katie Mitchell has been dreaming of attending a film school her whole life. Finally her dream comes true and there is a very little time before her departure. But her family has different plans — they want to take a road trip to their daughter’s new school together. Exactly at this moment technologies decide to conquer the world. The family has to put aside their differences and save the humanity from the “Rise of the Machines”.

Those Who Wish Me Dead

A teenage became a witness of a murder. Together with a survival expert tasked with protecting him they travel to Montana. There they should hide from twin assassins, who pursuing the witness and from a forest fire, which can kill them all.

The year 1989. A young woman is dreaming of having a music career on TV but the only thing that stops her is her hair. To achieve her dream she goes to a stylist and gets a hair extension — now she has nice smooth hair, which is appropriate for being on TV. But it’s not that simple because the hair has a secret of its own.

Oliver has autism. It’s difficult for him to spend time with the children of same age, so he prefers to have his head stuck in a smartphone or a tablet. Larry is dreaming of being friends with Oliver. The only thing is that Larry is a mysterious evil creature, which wants to sneak into our world through the gadgets.

A woman detective is dragging a married man into a crime.

Based on 2018 anime series, the movie tells about further adventures of two schoolgirl friends fighting against “Dark Tomorrow” organization.

Without a Certain Date

Molly and Abbey come up with a genius idea: to invite all their friends for the Thanksgiving. Pretty soon a lovely get together turns into a chaotic comedy.

Laura has an uneasy relationship with her father. Impetuous and charismatic playboy Felix incorporates everything what usually frightens off Laura. But when there appears to be a rift in the relationship with her husband it is her dad, who takes Laura on a spontaneous night trip in New York to help her solving her problems and to repair their own father-daughter relationship too.