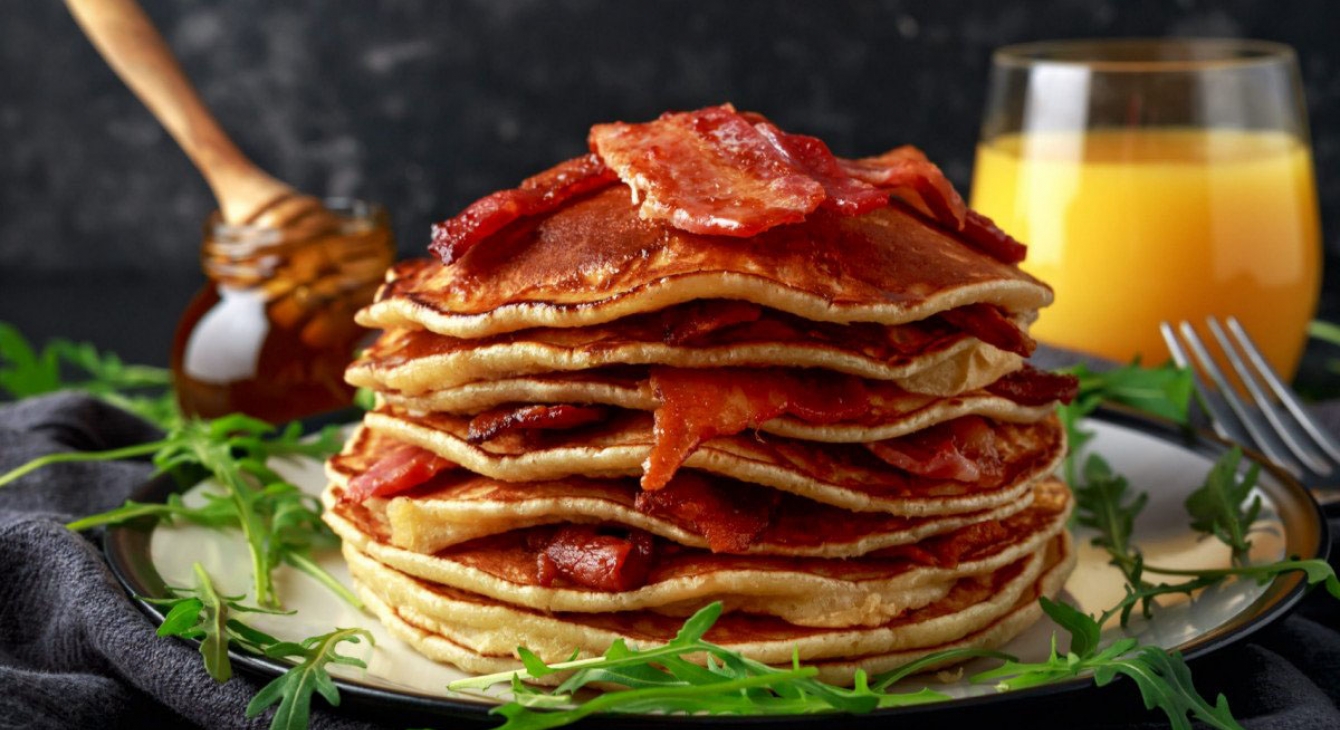 Autumn is here. Finally it became a little bit cooler outside, children are back to school and many parents, and not only them, started to think what kind of breakfast to make for the family. A breakfast that should be not only yummy but also gives you energy for the day. Rewatching one of my favourite animated series, I noticed one dish that can surprise your family and be a comfort meal at the same time.

“Sometimes, I think there's a monster who lives in my stomach and that's why I'm hungry all the time”

Finn the Human and Jake the Dog are best friends. They live in a magical kingdom of Ooo, have fun fighting monsters and rescuing princesses. During their adventures they meet a lot of new friends and peculiar creatures and also reveal the mysterious past of their world step by step.

In one episode Jake, singing a funny song to himself, is cooking bacon pancakes. This scene became so popular that someone created a mix with a song by Jay-Z and Alicia Keys.

Several interesting facts about the series:

The exact history of pancakes is a mystery; the only fact we know is that Scottish immigrants brought them to America.

Today it’s one of the most popular breakfasts and desserts in US and Canada. As a rule pancakes should be not thinner than 0,5 cm, soft and golden. They are usually served with maple syrup and different fruits — especially with blueberries. Pancakes are served as a stack on a plate, decorated with toppings and eaten not one by one (like Russian “bliny” for example) but as a cake — by cutting pieces from a whole stack.

By the way in Japan they make pancakes even thicker — around 5 to 10 cm. Almost like a small edible cloud!

1. Let’s start with bacon first. Take it out of the fridge 10-15 min in advance. On the cold and dry frying pan put several strips of bacon so they not touch each other. Turn to the other side as soon as they starts to curl. When they are roasted from both sides put them on a paper towel to absorb the excess fat.

2. Now we will make dough for pancakes. Carefully crack the eggs and separate yolks from egg whites. Try to do it so the yolk won’t mix with the egg whites.

3. Add sugar, vanilla powder and cinnamon to the yolks. Whisk until they become white.

4. Melt the butter and pour it into the mixture together with slightly warm milk. Stir carefully.

5. Sift flour and backing powder. Add it to the egg-milk mixture step by step to prevent lumps.

6. In another bowl, clean and dry, whisk the egg whites at the medium speed. Do not whisk them until stiff peaks. It’s enough to get a creamy consistence.

7. Part by part add egg whites to the dough. Do not use a food processor at this step! It’s better to stir the dough with a silicone spatula or a spoon. The dough should be almost as thick as a sour cream.

8. Preheat a frying pan on the medium heat. There’s no need to add butter before backing. Pour some dough in the middle so you get a pancake the size of a saucer. Put one or two strips of bacon on top. Turn it to the other side as soon as the bubbles on the surface start to burst. Usually it takes 1-2 minutes depending on the oven. The second side must be ready after 1-1,5 minutes. Put the golden pancake on a plate and repeat all the process with the rest of the dough.

9. By the way, another way to make bacon pancakes is to slice bacon, roast it and add right to the dough.

10. Perhaps you are curious what kind of topping could be great for this dish: ketchup or maple syrup? You will be surprised but usually it’s maple syrup or honey. Someone will find that combination of sweet and salty unorthodox but it won’t be less tasty anyway.

Your yummy and nourishing breakfast is on the table — it will give you energy for the day ahead! Do you know what time will it be after you finish? Yep. Adventure time!